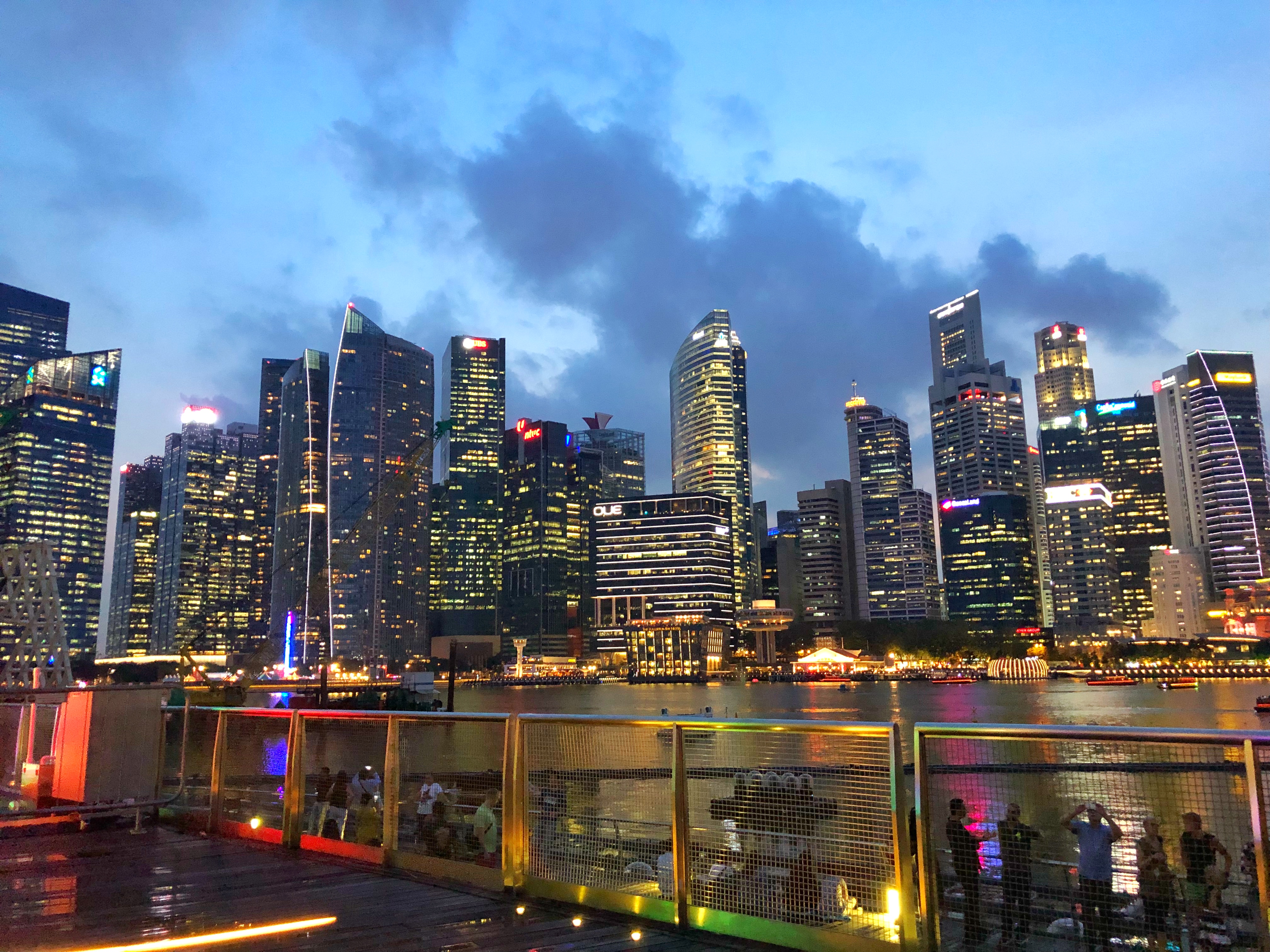 Singapore On A Budget | Free & Cheap Things to do in Singapore 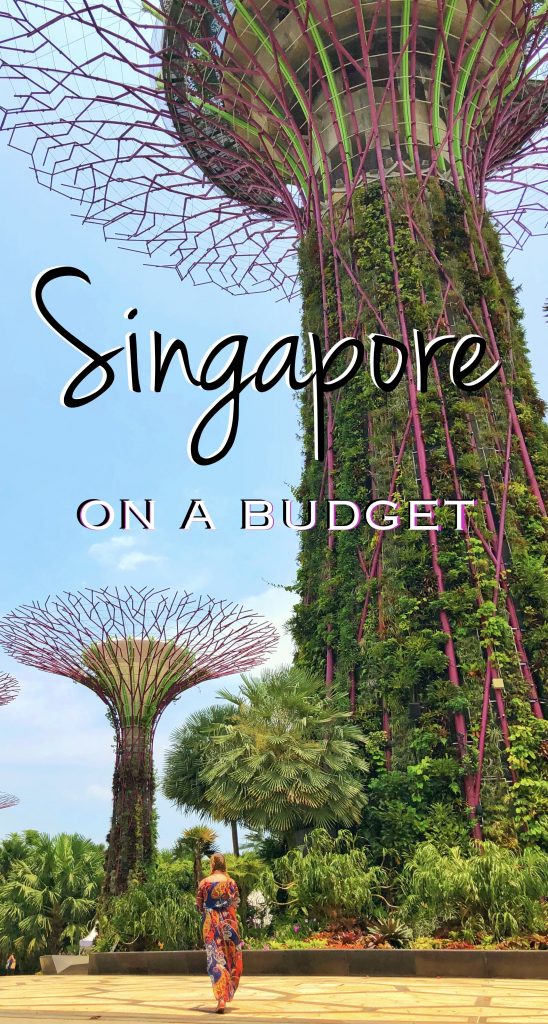 Visting Singapore on a Budget

Whenever I was planning my trip to Singapore, I was little afraid. Everyone that gave me advice about visiting Singapore said it is one of the most expensive cities in the world. I needed to see Singapore on a budget. The word “expensive” was not suppose to be on my radar. This didn’t stop me from visiting the city though and I’m glad it didn’t. Turns out a trip to Singapore doesn’t have to be pricey at all. There’s so much cheap stuff to do there – most things are even free! Visiting Singapore on a budget is definitely doable.

Below is a guide of where I stayed, what I did and how I did it. Hopefully it can help you spend a weekend in the beautiful city without crying when you check your bank account back home. 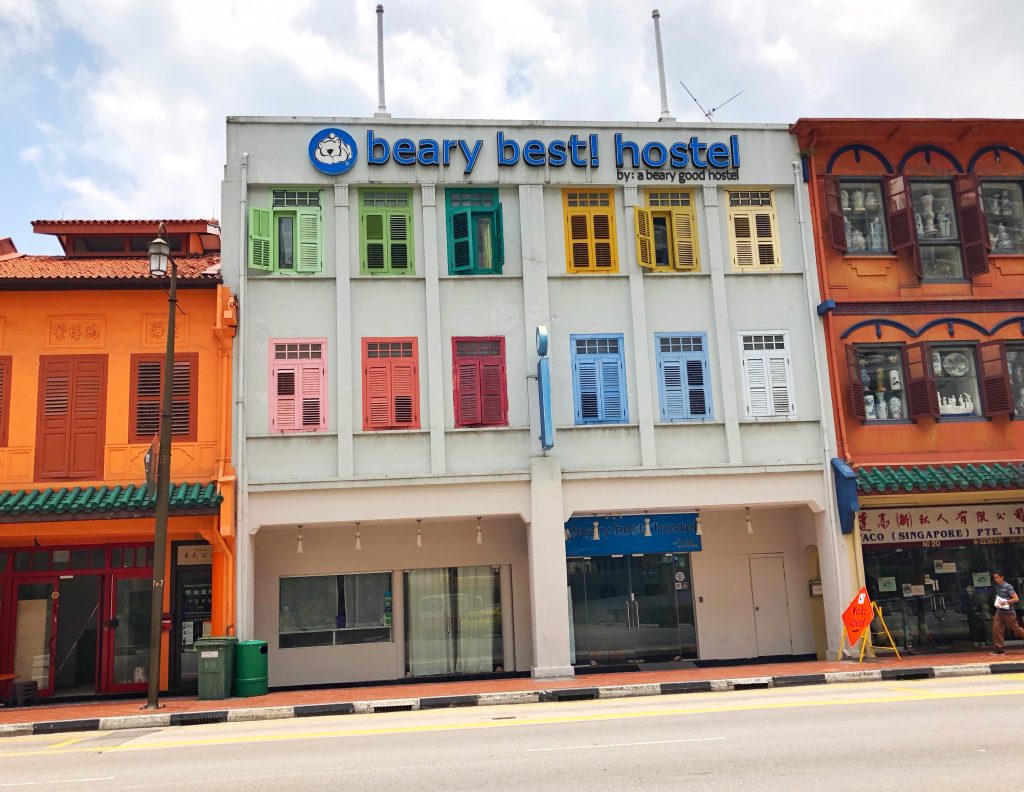 The hardest part about staying in Singapore on a budget was the accommodation. I’m used to hostels being about $10 night and turns out Singapore is double and even triple that. In the end, I ended up staying at the Beary Best Hostel in Chinatown. It was the least expensive hostel I was able to find for the weekend I was staying and knew it was in a decent part of town that allowed me to easily get around without having to spend a bunch on taxis. The hostel actually ended up being straight across the street from one of the subway stations (super convenient). Staying there costed me about $20 a night for a shared dorm. If you’re looking for your own space, expect to spend quite a bit more.

I had a couple favorite places that I checked out that provided some pretty awesome food for a decently low price. Based off what everyone was telling me, I expected every meal to be about $20 but luckily that wasn’t the case! One of my favorite meals was actually only about $5. 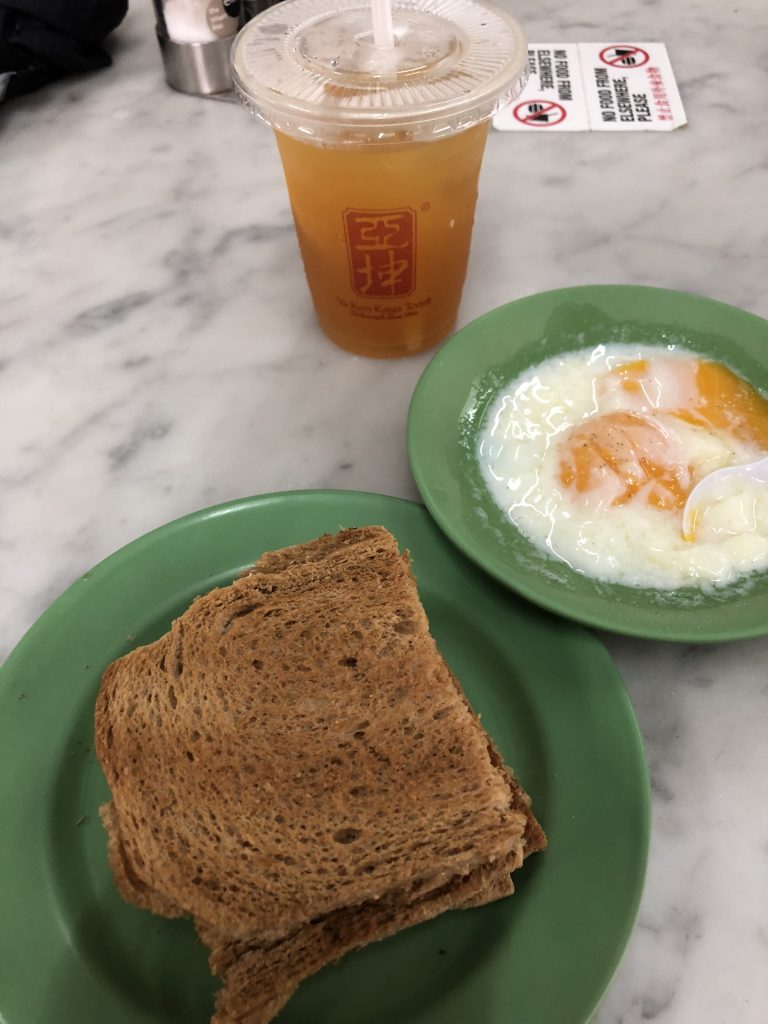 Kaya toast is one of the foods that Singapore is known for and there’s a reason – it’s GOOD. Yeah, it looks plain… but trust me on this one. Whenever I was off to find food the first thing I did was ask the hostel front desk for recommendations on where to go. Apparently the best place for kaya toast is “Ya Kun Kaya Toast” which just so happened to be about a 5 minute walk from my hostel. This place was definitely my favorite place I ate at while in Singapore. For a meal it ended up being just a little over $5. Not too bad for the best kaya toast in the city.

By the way…. this is the place where I discovered that I LOVE iced lemon tea in Asia. I don’t know what they do to it to make it so much better but I’m obsessed. 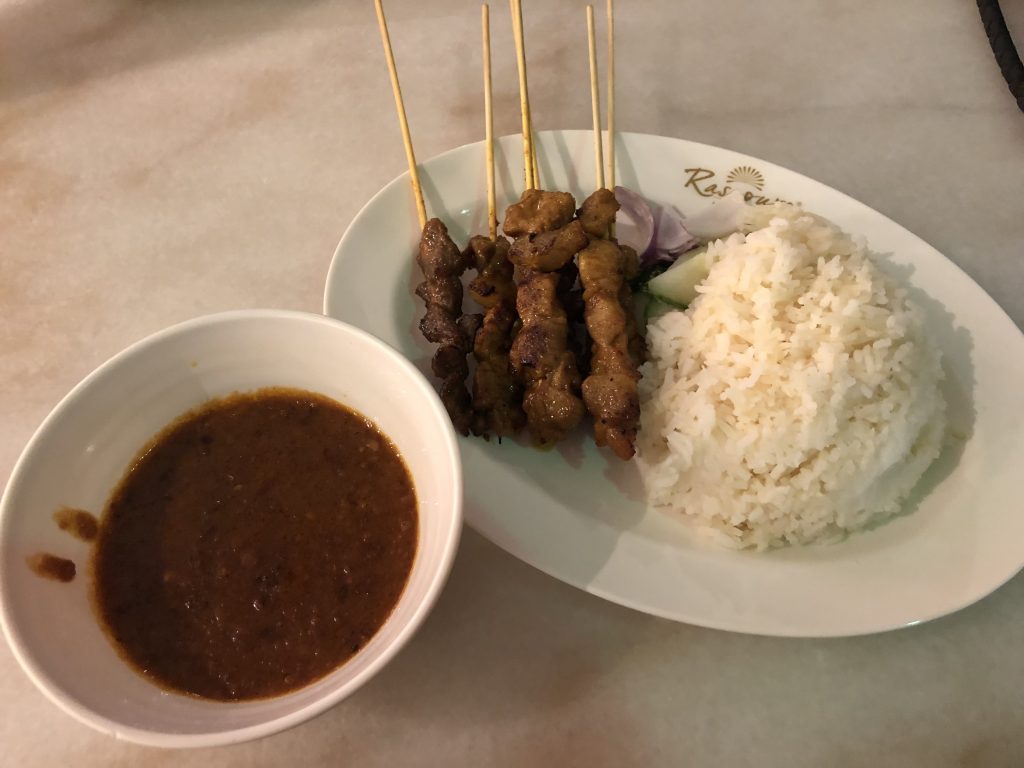 Another great option for cheap food is the food court in Marina Bay Sands. Don’t get that confused with the restaurants on the main floor – I ate there too and it was triple what the food court was! Head to the mall area in the hotel and find the signs all the way to the food court. It’s huge so it won’t be hard to miss. The Marina Bay Sands food court provides foods from all over the world. Indonesian, Chinese, Japanese, etc. It’s all there! Pictured above is what I decided to grab to eat while I was there and it ended up only being about $8 for the meal. I was happy.

Yay! The fun stuff! There was TONS of stuff to do in Singapore on a budget but since I was only there for a weekend, I had to limit my choices. In the end, I only spent about $50 on activities for the WHOLE weekend. This is way less than I was originally expecting and I was pretty excited about it.

Here’s everything I did: 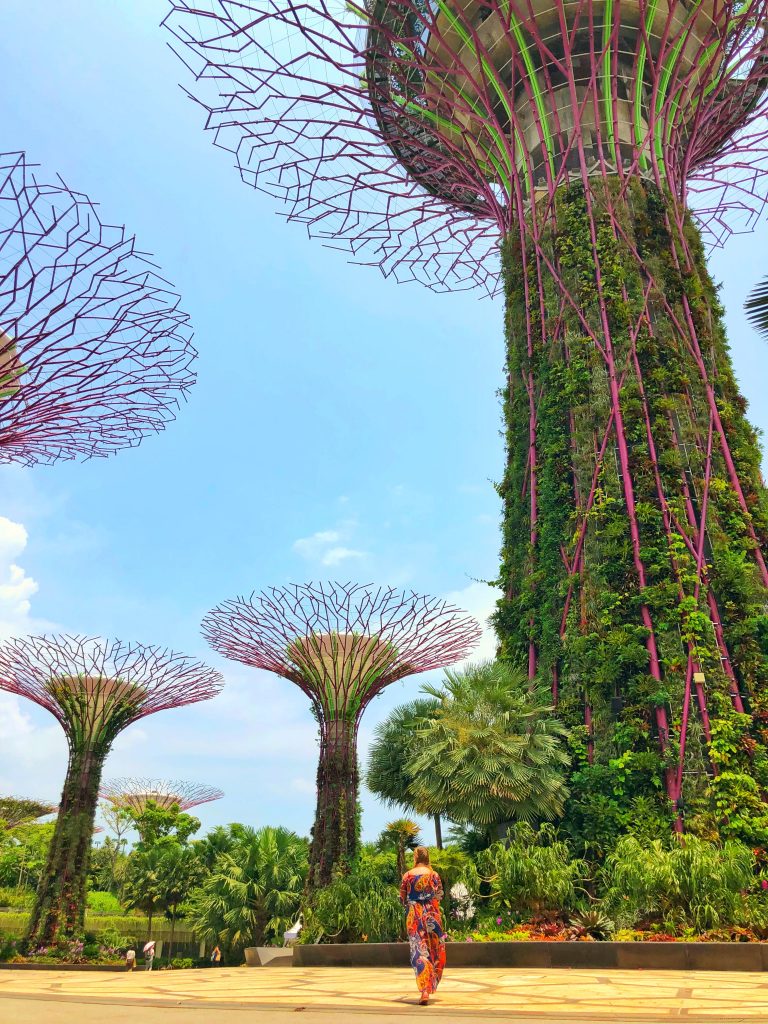 Gardens by the Bay: FREE

This is by far the most popular thing to do in Singapore and it’s completely free. Gardens by the Bay is a park that surrounds you with huge futuristic looking trees that are about 100 times taller than you. Walking around and taking pictures is absolutely free BUT it does charge a fee if you want to go up to the top. If you’re little less stingy about your money than I am, it costs about $20 to go up to the top where you’ll find a restaurant with a view of the entire city.

Be sure to go at both daytime and nighttime though because when the sun goes down they have a free light show EVERY NIGHT. The light show is not something to miss.  The huge trees light up to the sound of different music that plays throughout the entire park. Sit back, relax and enjoy the show – without paying a dime. 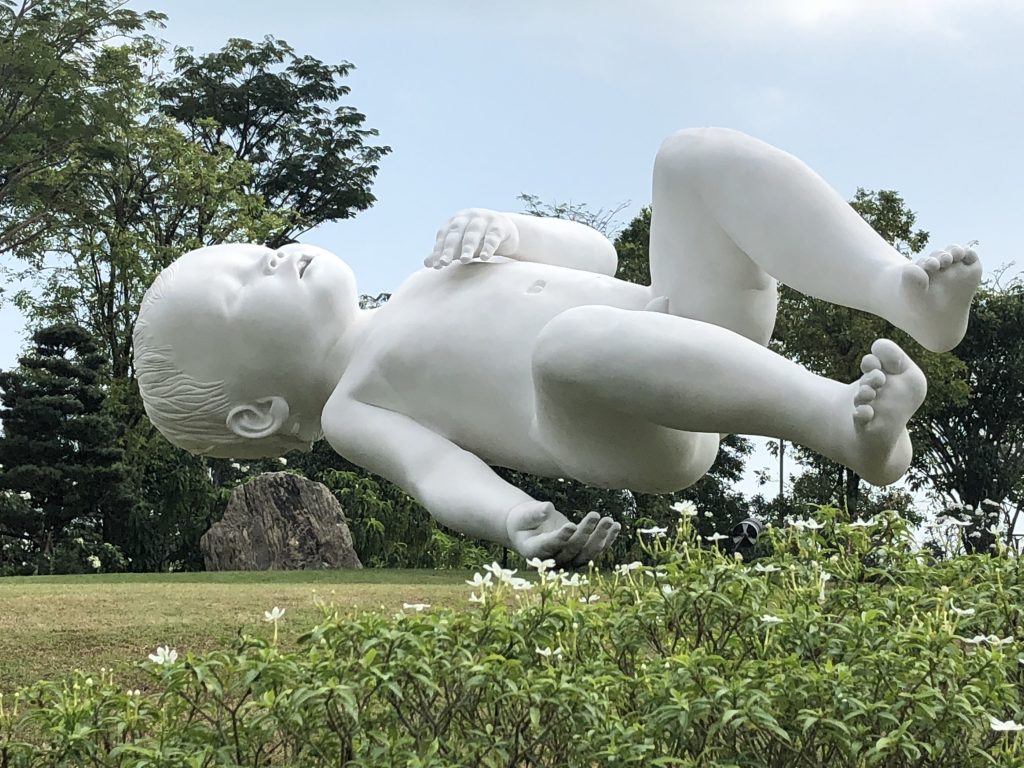 Planet is the name of this giant baby statue that I didn’t know existed until I was roaming around Gardens by the Bay. In the Gardens by the Bay park there’s a section called “The Meadow” which is where you’ll see this giant baby. The statue weighs 7 tons and is held up by only the hand of the baby. Although it may seem like an odd tourist attract, you had to admit it is pretty impressive. So if you’re into art I’d suggest walking over and checking this out while you’re at Gardens by the Bay. 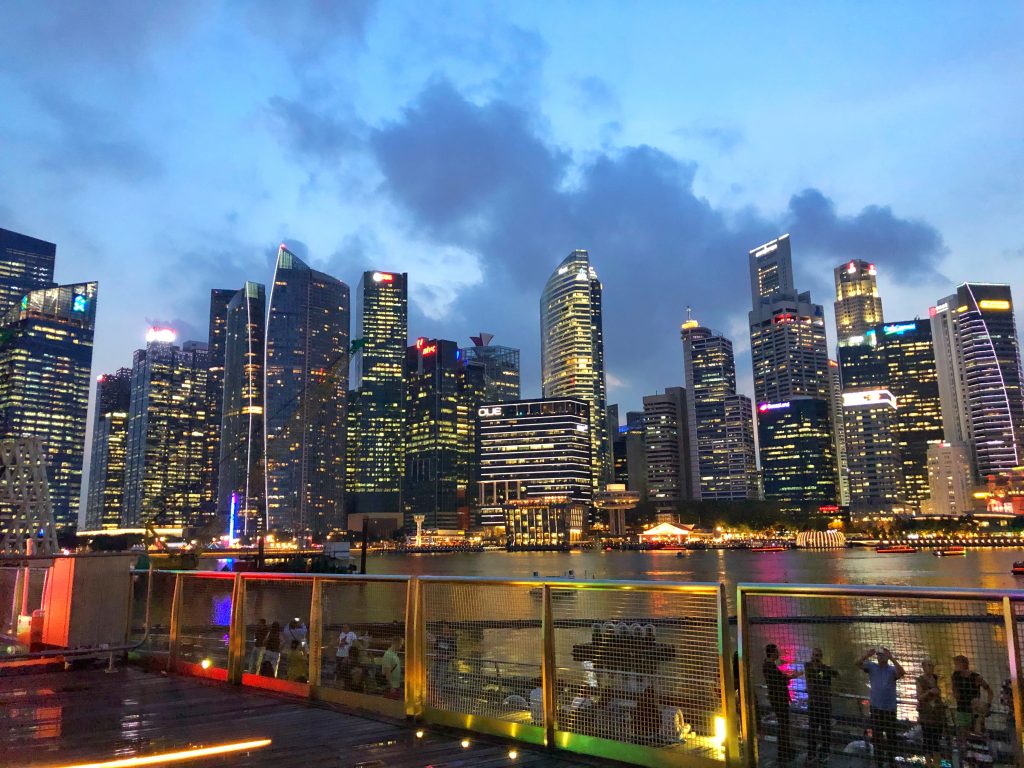 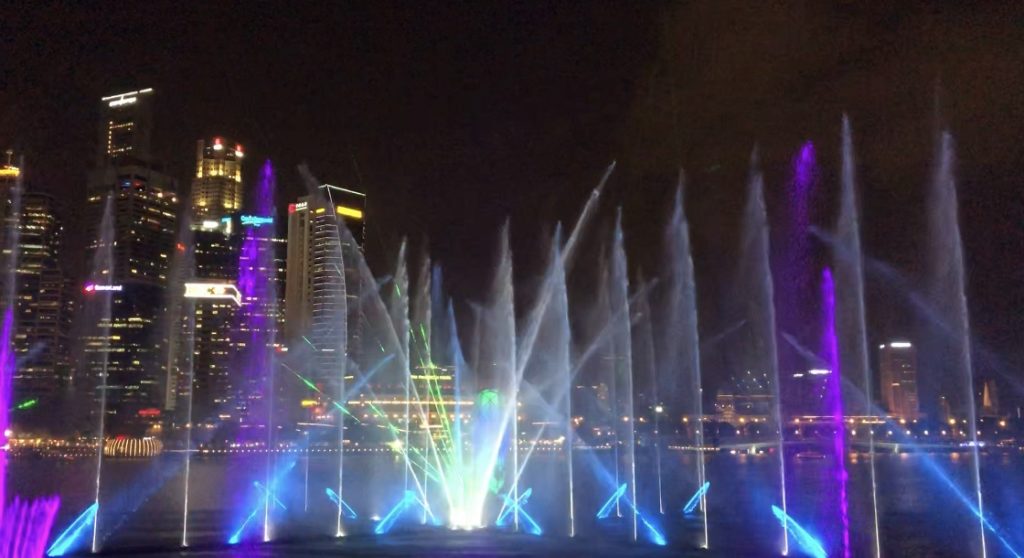 Gardens by the Bay isn’t the only night show to check out. The Marina Bay Sands has a water show on the bay every night as well. Just like the Gardens by the Bay, it’s free and it goes on about every 30 minutes. It’s actually crazy how extra Singapore is.

This was a place I didn’t plan on going whenever I was planning my trip but I’m so glad I did. It’s so hard to describe just how amazing this place was.

The ArtScience Museum is located right behind the Marina Bay Sands so it’s an easy walk from the food court or Gardens by the Bay. The museum offers didn’t types of exhibits which change throughout the year.

Whenever me and my friend went, we decided to check out the “Future World” exhibit and it was AMAZING. It was kind of based around little kids but amazed every adult in there too.

Whenever we first walked in the exhibit we were placed in a room where you sat down, the room went black and then ton of crows were projected on the wall where they flew around you. Sounds weird but it was honestly the coolest experience. Then you were brought into a room where waves were projected and moving around the room and all you could hear was the ocean.

The rest of the exhibit included interactive activities. One of the activities involved sitting down and coloring a car, UFO or house. Once you were done coloring it, you put it into a scanner and the drawing was transferred onto the wall where it came to live and you could watch it drive or fly around. Yup… you read that right… “Singapore on a Budget” just got extremely kid friendly.

Like I said, it’s hard to explain just how cool this place was…. but trust me! Check it out! 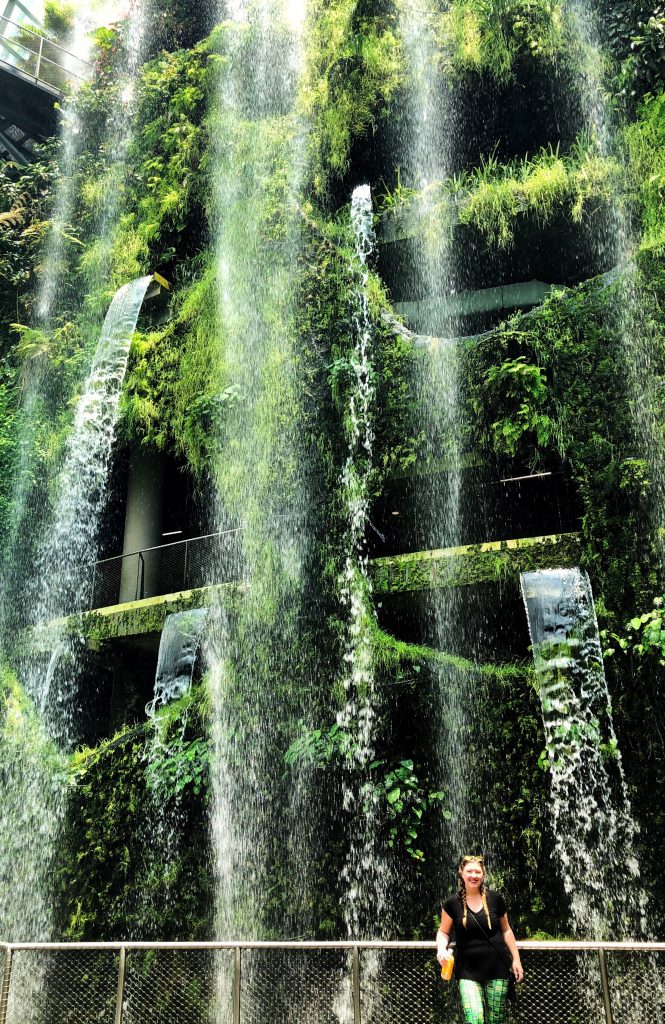 The Cloud Forest: About $20

If your version of visiting Singapore on a budget includes spending $20 here and there every now and again then you’re in luck because the Cloud Forest is the most expensive thing on this list. The Cloud Forest is a giant indoor waterfall surrounded by nature that you can walk around and inside of. The waterfall is about six stories high and you can go all the way to the top to see both a view from the bottom and an eagle eye’s view.

It didn’t take but a second of me walking in to see it to say “Yup, this is definitely worth the money.” It was gorgeous and is a major tourist attraction for a reason. 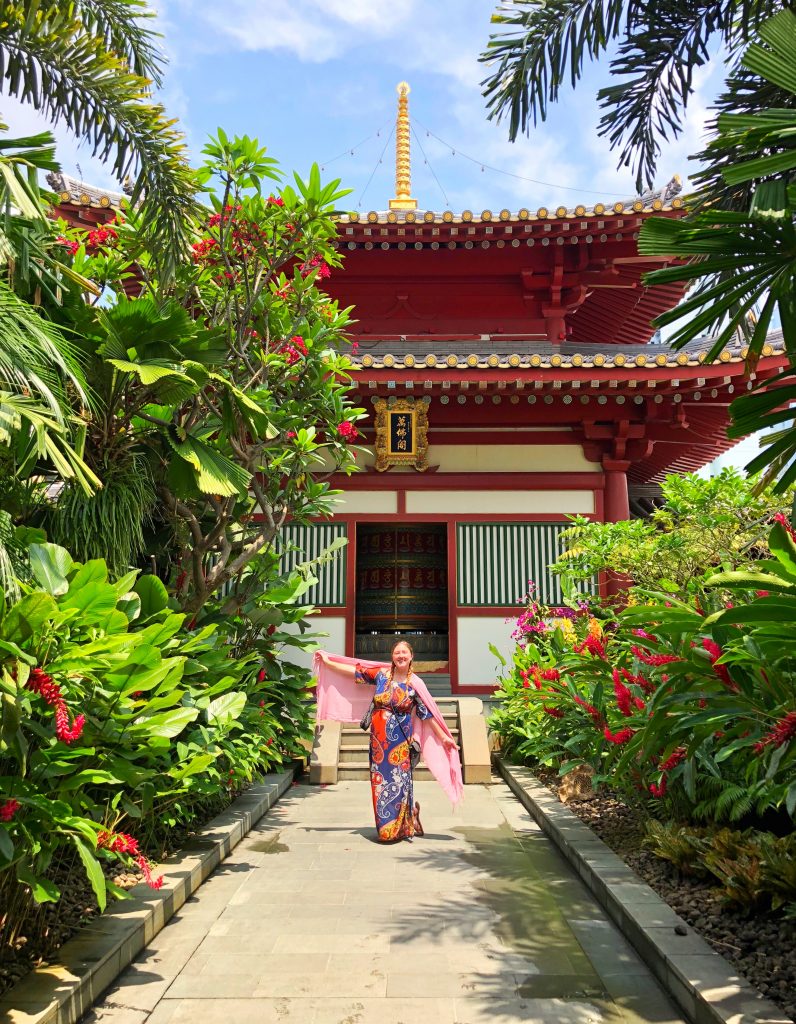 Since I stayed at Beary Best Hostel it wasn’t a far walk to all the popular locations in Chinatown. There are plenty of sites to see including the Buddha Tooth Relic Temple, Sri Mariamman Temple, the street market and more. If you only have to pick one place though, be sure to see the Buddha Tooth Relic Temple! It is completely free to go inside and really gives you a taste of a different religion.

Plus look at the amount of detail they put into this place. The picture above is only a small portion of what you’ll see if you go to visit the Buddha Tooth Relic Temple. 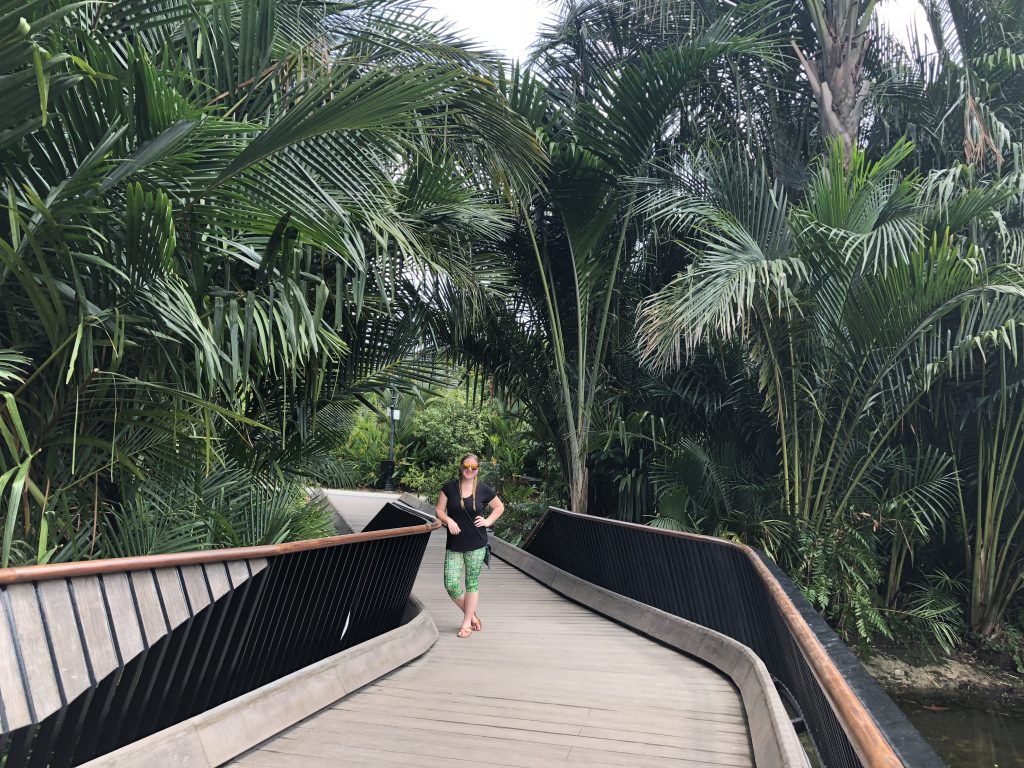 The Botanic Gardens is a place where locals go to run, play and hang out while the tourist walk around and check out all the plants the area has to offer. The place is huge and can easily be something that takes up most of the day. Me personally, I just stayed there for an hour or so. I checked out a couple of the gardens and was on my way.

One hour there was all I needed to have an awesome experience though. While I was there I was just a few feet away from a komodo dragon. I had never actually seen one in person and to see it roaming free around the park was definitely cool.

If I would have thought about it, the Botanic Gardens would have been a great place to have a picnic! Grabbing food at a local grocery store and taking it to the gardens can be a fun way to save some money on eating out. 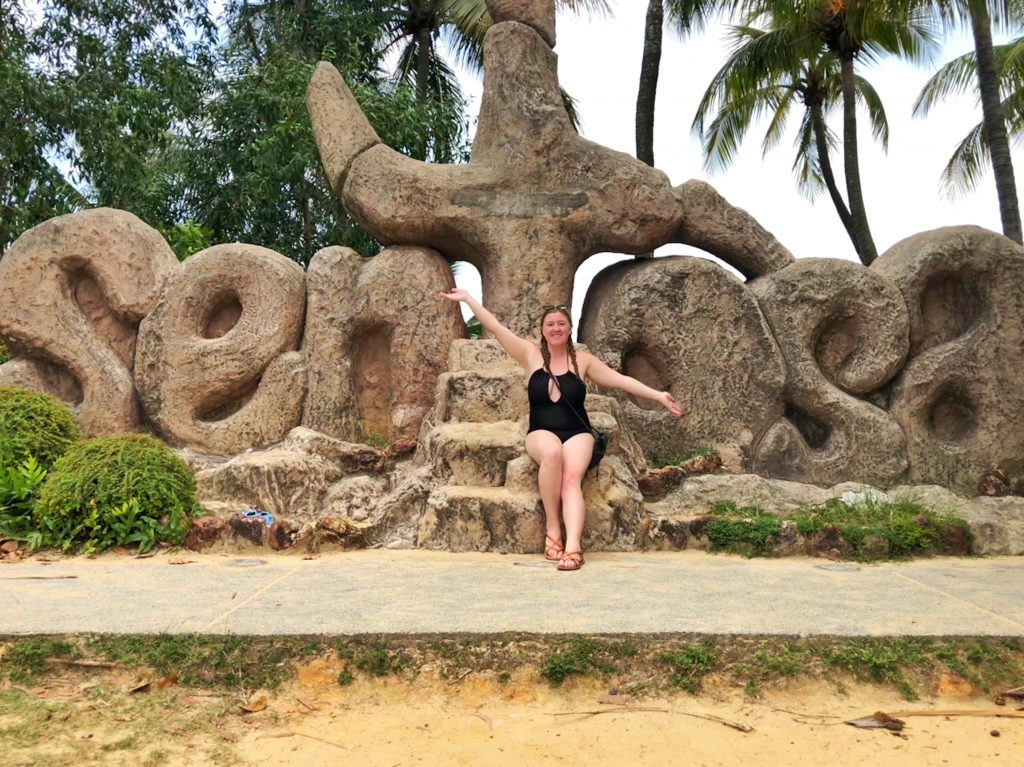 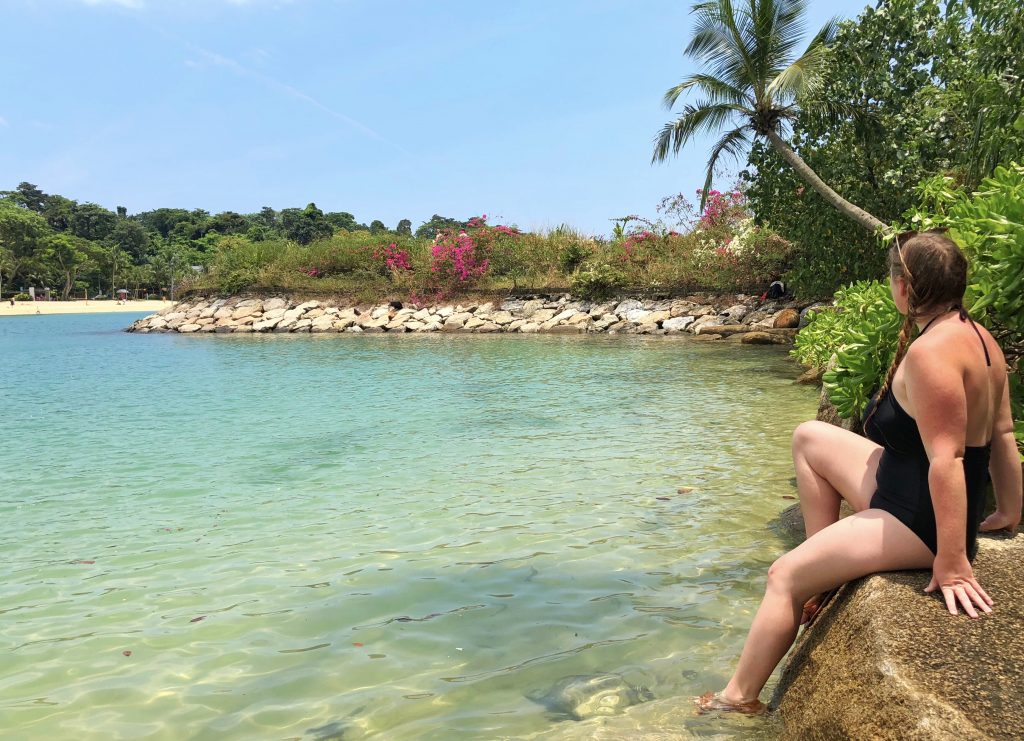 Sentosa is an island right below the city of Singapore. You can spend about $5 for a roundtrip ticket on the subway and go straight to the beach where you can relax all day for free. There are a few different beaches to choose from based on if you’d rather feel the party vibe, just relax or bring the kids. Either way the island has a place for you and it is gorgeous. Just be sure to bring sunscreen…. I wasn’t that smart.

My number one tip for visiting Singapore on a budget: Don’t expect to buy all your necessities in the city. Try to pack as much of the basic stuff in your purse or carry on as you can. For example, I had to buy tampons while in Singapore and the cheapest box costs me about $8 – and that was for the shitty ones. The ones I usually pay $8 for were almost $20 in the store I was shopping at in Singapore. I would have had a little bit extra for food or something if I would have been smart and packed extra in my purse. The little things matter.

So it turns out this beautiful city doesn’t have to be so expensive after all. Time to explore Singapore on a budget. Are you ready to buy the plane ticket to Singapore?